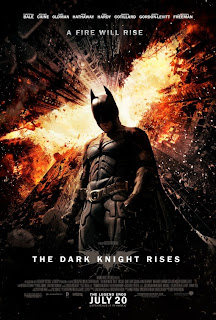 Based on the comic book series, "Batman" created by Bob Kane

First of all, I want to sent my thoughts and prayers for the victims of movie theater shooting in Aurora, Colorado.

Next thing I want to say that this review will contain some spoilers to the film. You have been warned.

Eight years have passed since the tragic events of The Dark Knight. Harvey Dent is definitely dead and is remembered by making a Gotham holiday out of it. Crime is banished from the city due to the Dent Act that incarcerated all the criminals from the streets. The Batman is gone, but not forgotten. Bruce Wayne (Bale) is a recluse like Howard Hughes except without the jars of urine lining the walls. He meets a slick jewel thief named Selina Kyle (Hathaway) that tries to get his prints for an ominous purpose for Wayne's rival, John Daggett (Ben Mendelsohn) to usurp his wealth.

Peaceful Gotham is rocked by an anarchist with the face mask that sounds like a bad impression of Sean Connery named Bane (Hardy), who tries to restore disorder into the city. He knows the truth about what happens that fateful night at the end of the last movie. Noticing the threat to the city, a hotshot cop named Blake (Gordon-Levitt) goes to Bruce to see if he could summon The Batman ,which he inexplicably knows Bruce's identity. Chaos ensues when Bane is trying to be like Robin Hood and The Batman is the only one that could stop him.

Coming into this movie, I was not expected to dislike the movie as much as I did. I enjoyed Batman Begins and The Dark Knight was a fantastic movie that had problems with it. The downfall of this movie is that the premise is fine, the execution is not great. I thought the story was very convoluted.

I didn't understand the purpose of putting Bane in the movie. The purpose of Scarecrow in the first movie was to instill fear for good to rise from the shadows. The purpose of Joker is to bring chaos into Gotham and that good men could turn evil like with Harvey Dent into Two-Face. I guess, Nolan was trying to make a social statement about people's greediness and if that money is taken away, you are nothing. It did nopt come across to me on screen. It was a bloated movie that has tons of monologues that didn't need to be there.

I think Christopher Nolan is great film director, but I think that he gets to wrapped in talking. I want to see action. Don't tell me that you are going to do something, do it. Show me. There is weird romance that was supposed to be between Bruce and Selina aka Catwoman that I felt was just there. I am familiar that Bruce and Selina have a cat and bat relationship where it was forbidden their attraction to each other. I did not feel that here.

There were a couple of sequences that incomprehensible like the opening scene where you meet Bane, the action towards the bridges or the herd of GCPD. I felt like I was gypped in this movie. There were "twists" coming that I knew were coming a mile away that completely implausible. The last couple of minutes of the movie were a slap in the face of how Nolan set up the universe. I couldn't wait to get out of the theater.