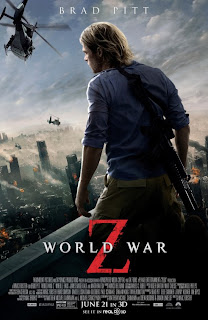 Based on the book by Max Brooks

There has been a lot of bad press surrounding this movie from the inception, the constant reshoots, Brad Pitt clashes with the director and rewrites to the script. Everybody thought the movie was gonna suck major donkey balls, including myself. My thought was that it was gonna be a trainwreck and marvel in its awfulness. After watching movie, it's not godawful. It's bland.

It's a typical day in Philadelphia where Gerry Lane (Pitt) spends quality time with his family. All of a sudden, a mysterious epidemic sweeps the world. People panic, running from people that look like they were on bath salts, the world is ending around them.

Gerry gets a call from an old friend, Theirry (Mokoena)-- Gerry and Thierry, really?-- to hide out in battleship where the outbreak reach them. Some of the greatest minds the field of medicine try to determine what kind of outbreak it is. Gerry was tasked to find the source of the outbreak so they could figure out a way to stop it.

Having only read the first ten pages of the book when I borrowed it from the library must have saved me from eviscerating this movie. The movie was supposed to be a December 2012 release. I don't think it belongs in the middle of summer movie season. It looks like it on more grand scale that it is, but its not.

The way the movie plotted along was disheartening for me as a viewer. The "twists" were seen from a mile away. It felt like the movie was dumbed down. It insulted me. The movie unsatisfying with dull action scenes, the stale dialogue and the "are you fucking kidding me" climax. Blurgh!